Her: how old is she?

Her: you’re going to have another?

Me: no we’re done

Her: really? Just one?

Me: yep, one is perfect

Her: yeah they’re a lot of work, and if you don’t have family nearby to help it can be too much

Me: she’s been awesome and I’m really glad I have her

Her: two is better

Me: well I have some health problems so one is just right for us 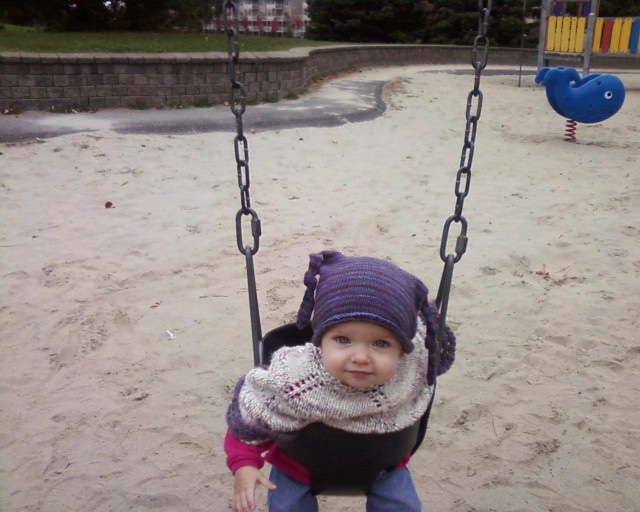 The photo is at the same park where this conversation took place, but several years earlier.

That’s how many of my conversations go with people when they find out we only have one child and plan to keep it that way. (Sometimes they seem downright hostile.) Thankfully it’s waning now that she’s 7 – I think people figure if we haven’t had another by now it’s a lost cause.

So it was so refreshing to have the opposite kind of conversation last week at work.

I work for an agency that supports people with disabilities. One of the men who use our services came into the office and I was helping him print some documents. As we worked we were making small talk.

And then it turned into big talk.

I’ve known this man for many years, since he was almost a child. I’ve seen him go through many ages and stages and grow up into a hard working, compassionate and kind young man. So it was totally fine when he asked “if you wanted to have another child now, could you?”

I answered “no, not really” and he immediately apologized and asked if it was okay that he asked.

He gave me an out from the conversation.

He gave me a chance to consent to the conversation.

I assured him it was fine to ask and I explained that I’m on medications that are incompatible with pregnancy and that aside from the meds, my muscles aren’t strong enough to carry a baby.

He asked a few more questions and then said “that sucks.” I tried to brush it off but he persisted by explaining that he remembered from a dozen years ago that I wanted to have lots of kids. He reiterated “that really sucks.”

It was such a meaningful interaction because he asked, he really listened, and he had no agenda. He just used the moment to connect.

I hope that I can remember that when I’m in those moments with people. When they share their story, I want to simply connect. No pat answers, no persuasion, no pushing to get what I want from the exchange.