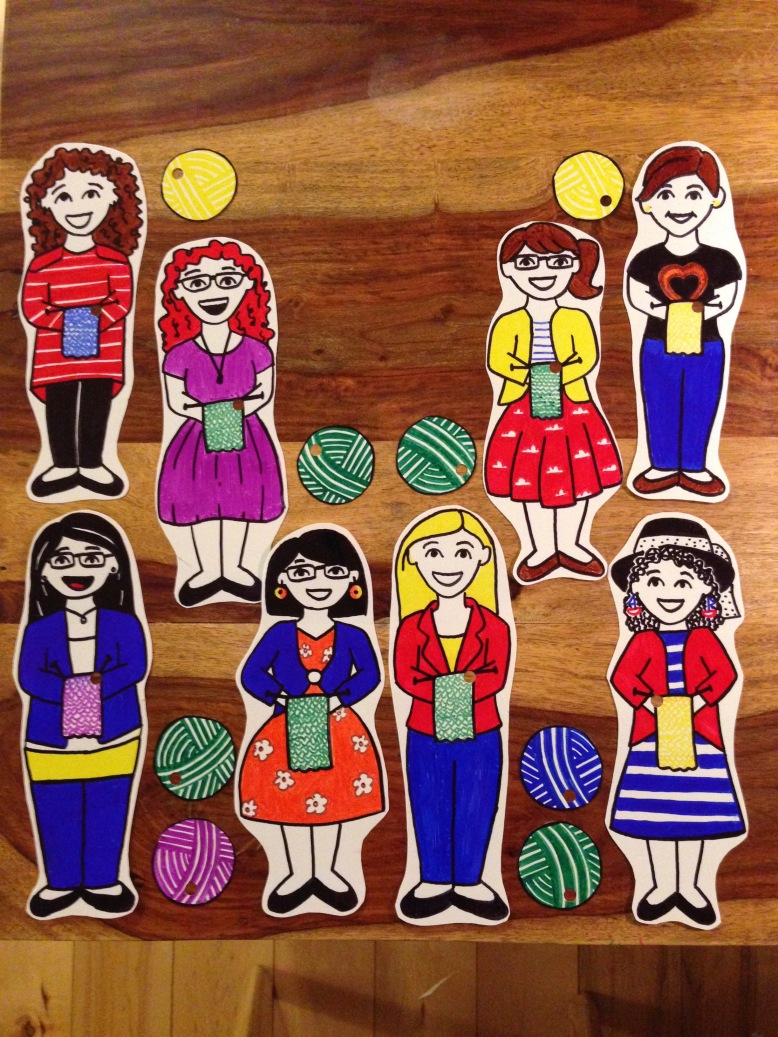 Shrinky dink images of each of “the ladies” prior to going in the oven.

Many years ago I invited a few of my friends to come over on a Monday night for knitting, tea, and snacks. We had a wonderful evening and as they were leaving someone asked “so, will we do this again next week?” And I said sure. I decided that as long as they wanted to come, I would be willing to host. For a couple years it was an informal, most-Mondays affair.  I also had some other evening commitments so it was a little hit or miss. And then I had a baby and then went back to work and as my husband and I were organizing our post-maternity leave life schedules I realized some things had to go. And I did not want my Monday nights to be cut.

“Craft Night” was born. Every Monday, unless I am very ill or out of town, I open my door to whoever comes. I post it on Facebook and people show up if they want to. Sometimes it’s randoms (“Hi! Is this Jasmine’s  house? I was told by my friend that people come to knit.”) but most of the times it’s the same group of ladies each week.

It has become a real little community. People share their funny parenting stories or their woes at work. They share their joys and they share their pains. It’s a real mix of ladies: some married, some single, some parents, some who never want children, some stay at home moms, some career minded women, some very devoted to their church, some with no need of religion. The common bond began as knitting (or crocheting, sewing, quilting, etc) but real, true friendships have been formed. We’ve gone to high tea on a Sunday afternoon, we held a party when a cancer scare was over, we visited a new baby in hospital, we produced a community knitted blanket for each “craft night baby” that has been born.  We take turns passing those babies around when they come so their mama can have some knitting time (and we can get some snuggles).

Some have moved away and still make the effort to Skype in and when they do it’s like they’ve never left. Their needles click right along with ours and the conversation flows smoothly across the room and across the country.

I’ve appreciated their friendship so much over the past few years. I used to think I hosted the group for them, but more and more it’s for me. My social circle shrunk severely when I stopped working and many days I don’t physically feel up to going out to socialize. Every Monday though I am surrounded by friends who bring snacks and stories and they don’t mind at all if I lie on the floor In my pyjamas. They’re my people. My community.

This years Christmas gift – bookmarks of themselves each knitting. The girl gets closed in the book and the yarn ball hangs outside.